Angel Trendafilov, of Underground Overground Archaeology, has been monitoring the bulk out of the new Convention Centre in Christchurch with the assistance of Kirsa Webb, Tristan Wadsworth, Teri Anderson, Hamish Williams and Peter Mitchell. The site, which was home to a variety of commercial, professional and residential activities in the 19th century, has yielded a large (and still growing) artefact assemblage, several brick lined and artesian wells (see below image), a large number of rubbish pits, and structural features.

Many of the artefacts date to the 1840s-1860s period, suggesting that at least some of the material found may be associated with the early decades of European settlement in Christchurch. The assemblage contains a wide range of artefact types, including several unusual clay smoking pipes, elaborately decorated glass vessels and uncommon ceramics. 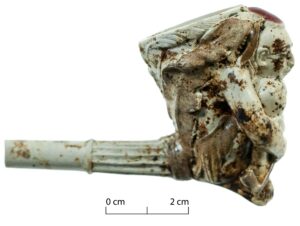 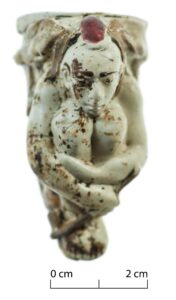 We have also uncovered a French clay pipe with a moulded Native American figure on the bowl (see above image) and a floor tile made by Jackson and Bishop, one of the earliest large scale brick making companies in Christchurch (see below image).

We don’t yet know whether the artefact assemblages relate to the residential, commercial or professional uses of the site, but it is worth mentioning that there was a fancy goods store and an auctioneers among the many occupants crammed on to these sections in the 1860s and 1870s.

For more information about the archaeology of Christchurch, check out the Underground Overground Archaeology blog ‘Christchurch Uncovered’ at: http://blog.underoverarch.co.nz/